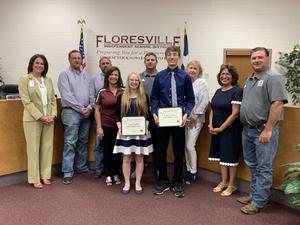 The FISD Board recognized Faith Gaudlitz and Glenn Upchurch for being selected September Students of the Month. Click the headline to read more about these outstanding seniors.

September Female Student of the Month

Faith Gaudlitz is the 17-year-old daughter of Lauren and Derek Gaudlitz.  Faith is in the top ten of her graduating class with an overall average of 103.  She plans to attend either Texas Christian University or Abilene Christian University upon graduation where she will major in Spanish and Modern Language.

Faith is a very active student at FHS.  She is a member of Link Crew and National Honor Society and serves as Corps Commander and Chorale Commander for ROTC, section leader for the Mighty Tiger Band, Treasurer of the Junior Historians, and President of the Leo’s Club.

When not busy with school activities, Faith leads her church Sunday school class.  Her top strengths are Empathy, Input, Belief, Intellection, and Developer.

September Male Student of the Month

Glenn Upchurch is the 17-year-old son of Rebecca and Jerry Upchurch.  He is ranked number 4 in his class with an overall 4.0 GPA.  Glenn plans to attend Yale, University of the Incarnate Word, or Texas A&M University where he would like to study History.

Glenn serves as the President of the National Honor Society, captain of the Cross Country team, President of the Board Game Club, and is an active member of the Gifted and Talented program.  He has received the Outstanding Student Award for many classes including Freshman Composition, On Ramps Physics, Pre-AP Algebra II, World History, and World Geography.

Glenn has also received recognition for his athletic abilities placing 1st in the American Hero 25K Solo Junior Division and 3rd place in the 2-mile run for track.  He works part-time at Whataburger while also spending his summer working building fences and taking care of animals.  In his free time, Glenn volunteers with the Wilson County Public Library and assists his mother with managing rental properties.  His top strengths are Discipline, Achiever, Input, Restorative, and Context.