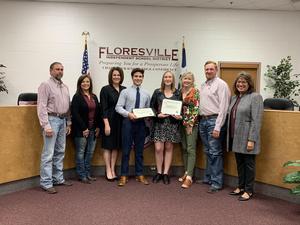 November Female Student of the Month

Maegan Mahula is the 18-year-old daughter of Cynthia and David Mahula.  She is ranked number one in her graduating class with an overall approximate GPA of 105.9.

Maegan is a very active student at FHS.  She is a member of the National Honor Society, has participated in the Gifted and Talented Showcase for the past four years, served on the Student Council Executive Board, and was JV Cheer Captain her freshman year.  She is a member of the Mighty Tiger Band in which she has held several leadership roles including Woodwind Lieutenant for two years. She has made the Region Band, advanced to Area, and qualified for the State Solo/Ensemble Contest.

In addition to her many activities, Meagan is in all advanced courses and has been awarded All “A” Honor Roll, Outstanding Student for AP Biology, Pre-AP Calculus, Pre-AP Biology, and Business Information Management.  This summer, she was named an Honor Camper at the West Texas A&M University Band Camp.

Outside of school, Meagan volunteers with her church Vacation Bible School and assists with the Mighty Tiger Band Uniform Crew.  Meagan plans to attend either Baylor University or UT-Austin where she plans to major in Radiology.  Her top strengths are: Competition, Deliberative, Achiever, Discipline, Relator.

November Male Student of the Month

Robert “Colton” Martinez is the 17-year-old son of Marvella Canales-Martinez and the late Robert Martinez.  Colton is ranked in the top ten percent of his graduating class with an overall 4.0 GPA.

Colton is an incredibly active young man.  He participates in the Mighty Tiger Band serving as Brass Lieutenant.  He is the Reporter for the National Honor Society, the senior representative on the executive council for Link Crew, in Student Council, Business Professionals of America, and acts as the emcee for FHS pep rallies.  Colton played on the Tiger Baseball Team his freshman and sophomore years, and he is a Prince on the Peanut Festival Court.

Additionally, Colton takes all advanced and has been on the All “A” Honor Roll. He has received the Outstanding Student Award for AP English III.  He has been recognized as the All-Region Trombonist in 9th grade, All-Area Trombonist in 10th and 11th grade and received Superior ratings at State Solo & Ensemble.

When not busy with school, Colton volunteers at Courage Ranch.  Colton has been accepted to UT-Austin where he plans to major in Communications and become a lawyer.  His top strengths are: Achiever, Learner, Positivity, Communication, Ideation.