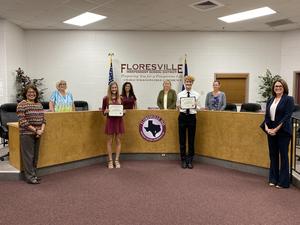 Katie Gawlik and Gage Strozier are the September Students of the Month. Read more about the many achievements of these outstanding seniors.

September Female Student of the Month

Lilian “Katie” Gawlik is the 17-year-old daughter of Nicole and Nick Gawlik.  She is in the top of her class with an overall GPA of 98.7.

Katie is an active member of the Jaguar volleyball team, National Honor Society, and the Gifted and Talented program.  She has received numerous volleyball awards including being named 2nd Team All-District and Academic All-District.  When not busy with her organizations and advanced coursework, Katie helps run the concession stands for the Athletic Boosters for middle school football games.  She also volunteers at her church and helps with middle school and elementary volleyball camps in the summers.

Katie plans to attend either Texas A&M University, San Antonio, Texas Lutheran University, or Schreiner University where she would like to major in Education.

September Male Student of the Month

Gage Strozier is the 17-year-old son of Pam and James Strozier.  He is in the top ten of his graduating class with an overall GPA of 106.

Gage is very active on campus participating in the Mighty Tiger Band, National Honor Society, Link Crew, and Board Game Club.  In band, Gage is the brass lieutenant and he was recently voted president for NHS.  When not busy with academics and school activities, Gage participates in the County Line Community Band through which he has played Taps for funerals, various holidays and celebrations.  He also has two part-time jobs working for Bar S Taxidermy & Processing and performing pool maintenance for the Floresville Country Club.

Gage has been recognized for his academic abilities having been named a Commended National Merit Scholar, Outstanding Student in Pre-AP English I, Pre-AP Physics, Pre-AP Spanish II, Pre-AP World History, and Honors Pre-Cal.

Gage plans to attend either Johns Hopkins or The University of Texas at Austin where he intends to major in Biomedical Engineering.