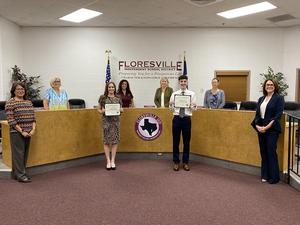 Mary Pierce and Michael Haag are the October Students of the Month. Read about their many accomplishments and contributions to FHS.

October Female Student of the Month

Mary Pierce is the 17-year-old daughter of Stephanie and Jeff Pierce.  She is in the top ten of her graduating class with an overall GPA of 103.6.

Mary is very active on campus taking all-advanced courses and participating in several organizations.  She is in the National Honor Society, FFA in which she participates on several judging teams, she is a Varsity cheerleader serving as co-captain, and has served as a class officer and on the principal’s student advisory committee.  She also participates in volleyball, track, and basketball.

When not busy with school, Mary volunteers her time with her church and participates in highway clean-ups and nursing home visits.  She works the Cheer Boosters’ concession stand during baseball & softball season, and assists the Athletic Boosters with their concession stands.  Currently, Mary is the queen-elect for the Floresville Peanut Festival.

Mary plans to attend The University of Texas at Austin, Abilene Christian University, or Texas A&M University, College Station where she intends to major in Biology with a Pre-Med emphasis.

October Male Student of the Month

Michael Haag is the 17-year-old son of Dixie and Mike Haag.  He is in the top of his graduating class with an overall GPA of 98.5.

Michael takes all-advanced coursework and is very active in the various organizations at FHS.  He has served as the class treasurer for all four years of high school, is an active member of the National Honor Society, and plays Varsity basketball.  He has received numerous awards and honors including Outstanding Student for Sociology, the Perfect Attendance Award, All A/B Honor Roll, and Academic All-District.  Michael is also a prince-elect for the Floresville Peanut Festival.

Outside of school, Michael works part-time at McDonald’s.  He volunteers with the Floresville Basketball Camp and participates in the Adopt-a-Family Christmas program.

Michael plans to attend Baylor University where he intends to major in Journalism.