May Students of the Month 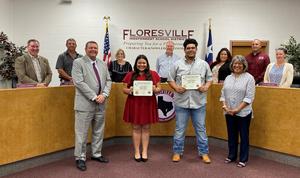 Abby Saenz and Josiah Farias are the May Students of the Month. Click the headline to read more about these outstanding seniors.

Abby Saenz is  the  18-year-old  daughter  of Yolanda Rodriguez Saenz and  Albert Saenz Sr. Abby is in the top ten of her graduating class with a  GPA of 4.0

Abby is an active member of the National Honor Society and has been on the all A-Honor Roll throughout her high school career. Additionally, Abby is the section leader of the drumline for the Mighty Tiger Band, she serves as the 2022 Class President, and she has participated in Link Crew serving as Orientation Leader for the incoming freshman class.

In 2018, Abby was recommended by the Floresville High School campus administration to serve as the student representative for the Floresville ISD Strategic Planning Committee.

Abby is a member of the Floresville FFA where she has held the offices of Historian, Reporter, and Secretary. Abby was a member of the FFA Public Relations Team that placed 1st out of 234 teams and was awarded state champion, the FFA Agricultural Advocacy Team that was a state runner-up placing 2nd out of 228 teams, and the FFA Landscape Nursery team placing 9th while also placing 9th individually. At the recent nursery landscape competition, Abby placed 1st individually in the area, and her team placed 1st in the area.

Abby volunteers her time at her church which includes serving as Vice-President for the Junior Catholic Daughters of America, being a member of Teen ACTS, and also assisting with Vacation Bible School.   Abby also was selected to represent the Floresville community as Queen Tunaep for the Floresville Peanut Festival Association. And she also was selected by the senior class as Miss FHS.

Abby has earned 27 college credits and will attend the University of Texas in Austin majoring in Pre-Pharmacy.

Josiah (Joe) Farias is the 18-year-old son of Christina and Frank Farias. Joe is ranked in the second half of his class with an overall GPA of  90.65

Joe has worked at Bill Miller and currently works at Walmart.

Joe plans to attend Ottawa University where he intends to major in Criminal Justice and has signed to play football.