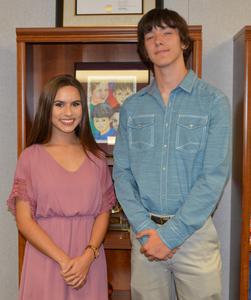 Read about Amylia Ryan and Richard Koen, the September Students of the Month.

Female Student of the Month – September

Amylia Ryan is the 17-year-old daughter of Alyson and Scott Ryan.  She is in the top ten percent of her class with a 3.9 GPA.
Amylia is in all advanced classes and is the Vice President of the National Honor Society.  She is currently a Mighty Tiger Band drum major and a princess on the Peanut Festival court. She is also a member of the Sunnyside 4-H and has been on the All-A Honor Roll for the past three years.  She has been in Link Crew, was first chair clarinet in the Symphonic Band, and made the Region band and All-District Orchestra in 2017.
Amylia volunteers with the Silent Auction at the Cowboy Breakfast, visits nursing homes and the veteran’s home and assists children at the Library Day.  She has a part-time job at HEB and has interned at Ryan Pediatrics in the summer.  Amylia plans to attend Texas A&M University-College Station where she wants to major in Biomedical Science and go to medical school to become an anesthesiologist. When not working on school assignments or volunteering, Amylia enjoys reading, shopping, and fishing.  Her strengths are Communication, Discipline, Consistency, Woo, and Achiever.

Male Student of the Month – September

Richard Koen is the 17-year-old son of Rebecca and Richard Koen.  He is in the top ten percent of his class with a GPA of 3.9.
Richard is a two-year letterman on the Varsity football team, is an active member of the National Honor Society, and an actor in the FHS Theatre program, participating in the One-Act Play last year.  He is in all advanced classes and was awarded the Business Award and several other academic awards as well as being named on the All-A Honor Roll.
Richard received the Silver Actor Award for Theatre and been recognized as Academic All-District for football for the past two years.  He volunteers at the San Antonio Food Bank and the Floresville Food Pantry while also participating in Relay for Life and the Blue for Drew Trash pick-up.  He currently works part-time at Lew’s Patio Grill.
Upon graduation, Richard plans to attend either UT Austin, UTSA or Texas A&M University-College Station where he wants to major in aerospace engineering.  His strengths are Context, Competition, Achiever, Analytical, and Responsibility.