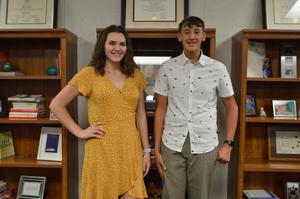 Read about Jade Hunt and Gabriel Aparicio, October Students of the Month!

Female Student of the Month – October

Jade Hunt is the 18-year-old daughter of Kimberly and Michael Hunt.  She is in the top quartile of her graduating class with an approximate GPA of 3.7. Jade has always been on the all A Honor Roll. She is very involved in Link Crew and National Honor Society.  She is an active member of the FHS AVID program where she received the AVID Student of the Month Award, last year. Recently, she has also joined the UIL Academics Team.  She is in all-advanced classes including dual credit and AP, and is on the All-A Honor Roll again this 9-week grading period. As a freshman, Jade lettered in track.  She received the Outstanding Student Award for AVID 3 her junior year. Currently, she works as an intern for FELPS.  When she is not working on academics or at her job, she donates her time at the local food bank.  During school, she volunteers to work the school store through Link Crew. Jade has already been accepted to Texas A&M University at Corpus Christi  and Texas State University.  She plans to major in business management.  Her strengths are: Includer, Responsibility, Restorative, Futuristic, and Developer.

Male Student of the Month – October

Gabriel Aparicio is the 17-year-old son of Gabriel and Melissa Aparicio.  He has an approximate 3.97 GPA with an overall average of 101.4 and is ranked in the top 10% of his graduating class. Gabe is the president of the National Honor Society, the vice-president of the Mighty Tiger Band, the captain of the Tiger Soccer team, vice-president of his 4-H group, the M.C. of the FHS pep rallies, and a member of the Gifted and Talented Program and Varsity football team.  He is in all-advanced classes and has been on the All-A Honor Roll receiving the Outstanding Student Award in AP Spanish.  He has received the Part-Time Honors Award from Palo Alto College, and is an AP Scholar. When Gabe is not busy with school, he volunteers his time at Sacred Heart Catholic Church and the ACYP Soccer program as a coach.  He also volunteers at the Floresville Public Library and with the Salvation Army. Gabe has already been accepted to Texas A&M University College Station where he hopes to major in chemical engineering, but he is holding out for Rice University.  His strengths are:  Communication, Futuristic, Woo, Adaptability, and Strategic.